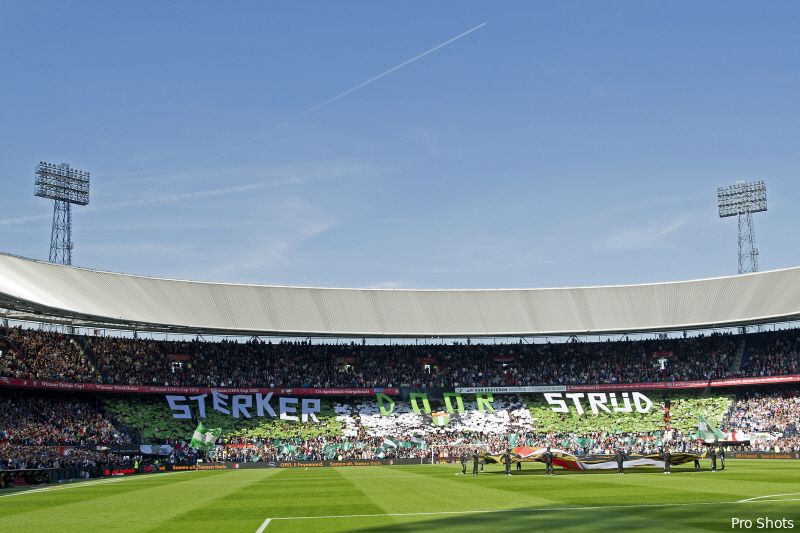 Feyenoord Rotterdam - Going crazy in De Kuip
The fan in front of me at the bar has just ordered 20 beers. He isn’t buying a round, they are all for him. It’s 11:30am. Welcome to Feyenoord.

I am at Varkenoord, which in addition to being the clubs training ground, is also the pre-match drinking venue of choice for the Feyenoord hardcore, known as Het Legioen. One of the most interesting things you notice about Feyenoord is that unlike the vast majority of European clubs, they do not have ultras. Indeed, of all my trips around Europe in the last 18 months, this was the first side I had chosen to visit that did not have an ultras group. The mentality of ultras is to support the team no matter what, to dedicate their lives to the club and to sing for 90 minutes win lose or draw. When the whole stadium does this anyway, there is no need for ultras.

Varkenoord is a pretty unique experience, I certainly do not know of any other club that turns its training ground into a binge drinking arena before every game. But the more you learn about Feyenoord, the more you realise that they are not just another club. In a game that is increasingly obsessed with wealth, they do it for the love, not the money.

Feyenoord had been on my list of teams to visit for some time, but after witnessing the incredible tribute to Rooie Marck I knew this was somewhere I had to go as soon as possible. Feyenoord are part of one of the most intense derby games in Europe, but the 020 (in Rotterdam, you do not say the word Ajax) game is not until March. With this in mind, I picked the second best looking fixture of the season, with Ado Den Haag coming to town. I knew all about Den Haag due to their friendship with Swansea City, with rumours surrounding every South Wales derby that Den Haag fans would be joining forces with the Jack Army. While this never actually happened, I had seen enough about Den Haag to know that they were the second craziest set of fans in the Eredivise, behind only the boys from Rotterdam.

I had been invited to attend the game in Vak W, one of the most active areas of the stadium. a group so famous that a banner was made about them in Amsterdam last month in the first derby of the season. The security outside Stadion Feijenoord (known as De Kuip) was almost as tight as the security at the airport that had got me to Rotterdam, with hundreds of police and stewards, sniffer dogs and a body search which was so invasive of my personal space they should at least have bought me dinner first.

My friend explained that there had been trouble at the cup game on Thursday when the police had used pepper spray on the fans for no reason, causing a small riot. I wasn’t surprised. It looked as though you could use an AK47 on the average Feyenoord fan without doing much damage, never mind something as minor as pepper spray.

After taking in the atmosphere at Varkenoord, it was time to head into the ground. My ticket was for a totally different section of the stadium, but I was able to sneak into Vak W using the card of another fan. The picture looked nothing like me, but the stewards at Feyenoord are probably just glad to be alive, without worrying about trying to kick people out. Sadly De Kuip does not have a terrace, but this problem is overcome with everyone standing on their seats. With the amount they drink before the match, it is a miracle that most Feyenoord fans are able to stand at all, even without the added danger of balancing on a small plastic seat.

Just before the game kicked off, the stand behind the goal displayed a green and white tifo (the colours of the city of Rotterdam) displaying the message “stronger through struggle”

The Den Haag supporters were up in the top tier and struggled to make themselves heard about the superb noise of the home crowd, but they certainly looked up for it, bouncing up and down and waving green and yellow flags.

The atmosphere inside the opening ten minutes was some of the best I have ever seen, with the home fans singing a number of songs in English including “We shall not be moved” and “I’m Feyenoord til I die”. Just six minutes later it felt as though I might actually die, with Feyenoord taking the lead through star striker Graziano Pelle, who has signed full time for the club after a fantastic loan spell last year. When you score a goal in the last minute against 020 you never need to score another goal again to be a hero at Feyenoord, but Pelle managed to find the net 27 times in 29 games last season. Going in to this game he had scored six times in the opening seven matches, adding to his hero status further still. You suspect that in 10 years time, there will be entire classes at Rotterdam schools with the name Graziano.

As he has done so many times before, Pelle was in the right place to slide the ball into the net with a calm finish. If he was calm, the stands certainly weren’t, with bodies flying all over the place and supporters tumbling over the seats to the ground. It was the maddest goal celebration I’d seen live since Borussia Dortmund’s 94th minute winner against Malaga in the Champions League, and this was just a fairly standard league game. If Feyenoord ever scored a goal of that importance, you’d probably be able to hear the noise of it as far away as Malaga.

It was to get even better for the home side, as they scored a second goal just before half time, with an equally as frantic celebration sending limbs flying once more. The Den Haag fans quietened as Feyenoord went into victory mood, with the rest of the game more of a party than a contest. Any hope for Den Haag vanished in the first 15 minutes after half time, as Pelle scored twice more to complete a hat-trick, and give himself the incredible record of 36 Feyenoord goals in 37 games. A new song was sung by the Feyenoord faithful, waving to the away fans and serenading them with “always look on the bright side of life.”

However good they are off the field, there are weaknesses within the Feyenoord team this season and a string of errors helped the visitors to get back into the game. First of all they won a penalty for a clear foul inside the box, The Den Haag fans prepared to wave the huge flags they had shown off before kick off, but had to put them back down again after a terrible penalty, the ball flying so far over the bar that it almost joined the visitors from the Hague in the top tier of De Kuip.

The green and yellows would get something to celebrate soon however, as ex-Feyenoord player Ricky Van Haaren scored with six minutes remaining, shortly followed by an own goal that made the scoreline appear a lot closer than it actually was. Indeed, Den Haag could even have stolen a point, with a couple of missed chances in injury time to go alongside the penalty which had gone into orbit around the moon. There was to be no dramatic comeback after all, and the game finished 4 – 2. As we left the stadium, the boys from Vak W told me there was one more thing I had to see as part of a matchday at Feyenoord. There is a bar underneath the ground which plays rave music at half time and full time of every game, with the home fans bouncing around to happy hardcore and generally going mental. I was told that it was pretty quiet today compared to normal, who knows what it must be like when Aja…I mean, 020 come to town.

When it comes to ability, I have seen many better sides than Feyenoord over the years. However, the club as a whole is hugely impressive and up there with anybody in the world. The fans are incredibly passionate, and the result of the game does nothing to change the love they have for the club. When looking at Dutch football, Amsterdam is the home of the Erevisie title, but Rotterdam is the home of some of the best fans anywhere in the world.

There is a saying in the city that visitors to the club catch “the Feyenoord virus”, a feeling which inspires people to visit again and again. If this is true, then I have an incurable case of the Feyenoord disease, as I hadn’t even checked in to my flight home before I was planning the next visit. All being well, I will be there next year for the visit of ’020′. Having seen the unbridled love they have for Feyenoord and the fact that the hatred of their rivals is so intense they will not even say their name, it might just be the craziest match I ever attend.

Until I return… Rotterdam, stand your ground!